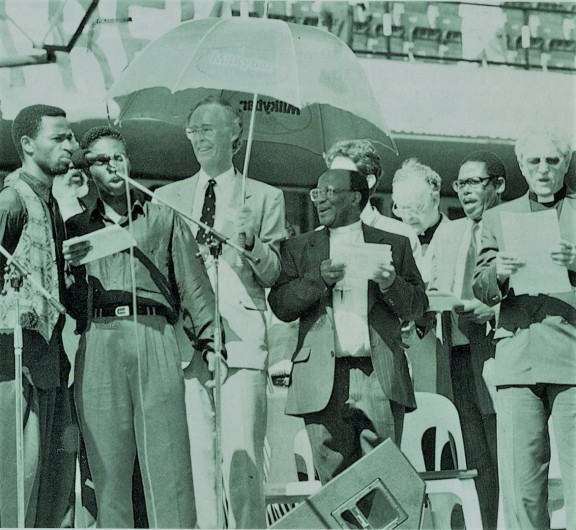 Miracles are wrought through prayer.  That's been the experience of Christians right down through the ages,  but perhaps one of the greatest miracles in modern times stemmed directly from a huge prayer gathering in Durban.

Thirty thousand believers had gathered at the Kings Park Stadium for the Jesus Peace Rally a week before the first multi-racial elections were to be held in South Africa.  The event was being held amidst high tensions in the country,  especially in KwaZulu-Natal.  The Inkatha Freedom Party,  led by Chief Mongosuthu
Buthelezi,  was refusing to join the elections.  Many people were forcasting a blood bath, with possibly a million people being killed.  One main hospital in Pretoria was preparing for three thousand casualties on Inauguration Day alone.

Yet the elections,  to the amazement of the world and relief  to the South Africans, passed peacefully.  And comparative peace remains,  despite tensions increasing in areas like KwaZulu-Natal.  And the Jesus peace Rally provided the key to peace.

Amidst all the prayer,  praise and worship going on,  a break-through was happening in the VIP lounge of that same Kings Park Stadium. Three key players in the election process were studying a document - and it was dawning on them that the formula presented in it was acceptable to all of them and their parties.  One of the men was Chief Buthelezi.  he took the document back to his Inkatha colleagues and it was quickly announced that their party were joining the election process.

The document had been drawn up by veteran Christian diplomat Dr Washington Okumu,  a Kenyan with great experience in African politics.  He had been invited by Michael Cassidy to help the political parties find a way through the deadlock that had been keeping Inkatha out of the election process.  Michael and his AE colleagues have been involved in reconciliation ministry in South Africa and had initiated dialogue weekends between senior polititians right across the political spectrum.

There were no agendas at these gatherings other than to let participants share their experiences and perceptions of what would be the way through for the new South Africa.  "The major thing was that relationships were born" said Michael,  whose book,  A Witness For Ever  (Hodder & Stoughton)  tells the full story of the miracle of the dawning of democracy in South Africa.  'One of the lessons for me in South Africa is that forward movement,  whether spiritually,  socially or politically,  takes place on the wheels of the discovery of deepened human relationships,  of trust and understanding"

Along with the dialogue weekends,  African Enterprise had initiated a twenty-four hour prayer chain involving hundreds of thousands of Christians paying for South Africa from April 1993 right through to the present day.

And amidst the volatile atmosphere of KwaZulu-Natal,   where young people in particular were openly arming themselves for civil war,  African Enterprise called people to a Jesus Peace Rally - a "solemn assembly"  in accordance with Joel 2:15-18.   The response,  despite fears among people that they would be attacked while travelling long distances to a prayer meeting,  was extraordinary.  There was a mighty sence of repentance there and of looking to God for His intervention in the political arena.

Dr Okumu came to South Africa to act as Adviser Extaordinary to the international mediators.  When mediation failed it was Michael who persuaded him to stay on -  "because he understood the  issues better than anyone else"  Dr Oksumu met with the different sides and finally came up with the formula which led to the breakthrough.  He planned to bring the document to the Jesus Peace Rally on that April Sunday last year,  but was asked by Nelson Mandela to come to Cape Town.  So he handed it to Chief Buthelezi to show to Jacob Zuma  (ANC,  representing Dr Mandela)  and Dani Schutte  (then Minister of home Affairs and head of the white government's electoral affairs)  at the rally.

As the three men read it,  hearts and minds met.  As the rally closed,  they went their separate ways to colleagues.  Thirty-six hours later it was announced that Inkatha had entered the election.

"The announcement of Inkatha's entry in a spirit of peace,  reconciliation and goodwill",  said Michael Cassidy,  something which still largely pravails in the country.  it's significant that several of thed most key conversations that finally brought the breakthrough took place in the Jesus Rally in the VIP lounge when those 30,000 Christians were praying" he declaired.

A year on,  a Jesus Praise Rally was held at Kingsmead Cricket Ground,  Durban on April 30 to thank and bless God for the election miracle and also to call on Him to hold South Africa steady and block the spirit of alienation rising again in many parts of the country,  especially KwaZulu-Natal.

The gathering storm clouds in KwaZulu-Natal means that more dialogue weekends are planned.

African Enterprise,  as well as other Christian groups,  are very concerned about a move to remove  "in humble submission to God,  we the people of South Africa.."  from the Constitution.

Although South Africa "will inevitably declaire itself a secular state

(not attached to any living faith),  nevertheless this nation,  where ninety-nine per cent of the people are theists and believers of some sort,  needs to ackowledge itself  'under God'  and in 'humble submission to Him," says Michael.  "It needs to be grasped that freedom of religion does not mean freedom from God."

The election on Nelson Mandela as South Africa's first black President has,  in fact,  brought a whole new set of challenges to the Christian Church,  especially over the more moral and ethical issues.

"We cannot bow  to the notion that sensitivity to other faiths means that we are silent. "

'We don't want to go out of the apartheid frying pan into the fire of the neo-pagan society,'  explained Michael.  That could easily happen.  There is a tendency for people to think that having liberalised on the race issue,  the country is obliged to liberalise on everything else - homosexuality,  abortion on demand,  pornography,  divorce...

Inter-faith is another big issue,  something which,  in Michael's words.  "has hit the Church like a sledgehammer"

The Mandela government,  unlike it's  predecessor,  regards all religions as being of same importance.  The issue has resulted in some confusion in Christian ranks.

"It's very important that Christians are firm and reafirm that Christinity is a missionary faith unashamedly"  declared Michael.

'We cannot bow  to the notion that sensitivity to other faiths means that we are silent. I cannot go along with the loss of nerve in certain sections of the South African Church about proclaiming the Gospel of Jesus Christ to every person or thinking we've got to buy into some kind of implicit universalism or become syncretistic in our view of religious faith.'

Opportunities for the Gospel in South Africa are beyond anything Michael has seen in all his years proclaiming it.  "There is a greater spiritual hunger, a greater openness to mission and evangelism among ministers and pastors"

Working with the churches,  African Enterprise is seeking to evangelise 4.3 million people in Durban and the surrounding region over 3 years.  It has a similar programme for Pretoria.  Missions will be geared to various levels of people from leaders down to grass roots and targeting professional groups such as  lawyers,  doctors and business people.  Doors beckon into schools,  colleges and universities.  The black township are open to the Gospel as never before.

I think God has given us a three or four year corrider of extraordinary opportunity which we mustn't miss"  summed up Michael. 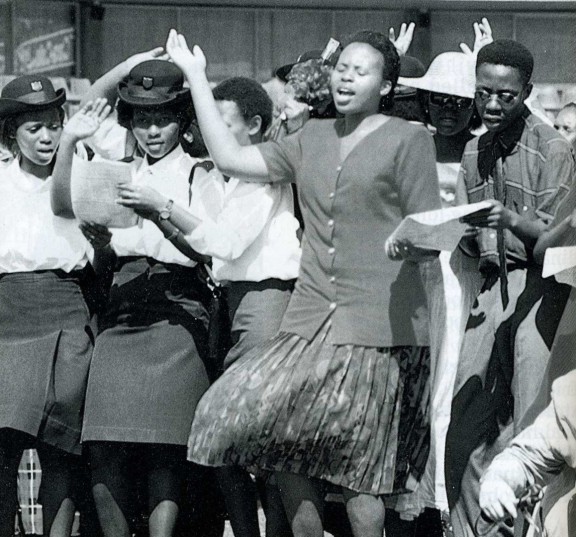 Praise the Lord,  more and more ministries now let the homeless sleep in their church halls over winter.

Depending on the venue the  'guests'  can be treated like royalty,  enjoying new clean designer clothes and bedwear provided daily, gormet food and heated floors to aid a decent nights sleep.

To celebrate,  LIGHT INTERNATIONAL looks back at her rather special visit to  Christian - run Rehabilitation Centre  Teen Challenge.

We are  delighted to present  LIGHT INTERNATIONAL - The Global Review of Christianity to the world once more in 2018 - an important time in our history...

A huge thanks for your patience while we upload more and more articles from the five sections of LIGHT INTERNATIONAL within the coming weeks.

Covers the day to day running of Churches in different parts of the world.

For business people... The I.C.C.C. International Christian Chamber of Commerce and others demonstrate  the miraculous new dimension of Jesus at work.

Deeply spiritual articles on gifts and fruits of the Holy Spirit.  Includes Spiritual and Praise Warfare, Intercession on a Global scale,  and  'forgotten' teachings like   'The Witness of the Spirit' by David Wilkerson.

Especially  gifted and often larger ministries sharing with us how our own faith and churches  can grow beyond belief...  Includes The Largest Sunday School in the World and The adoption of Third world orphans.

Billy Graham on how we should live our life,  lifestyle, including travel, and taking your church on a pilgrimage. World class sportsmen with faith and other celebrities etc sharing with us...