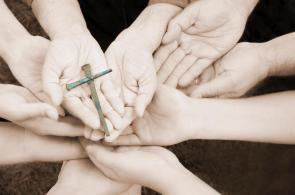 Peter Michell is a

Director of the UK International Christian Chamber of Commerce,  Author of   'Faith at Work',  New Wine Press and a spirit filled Accountant.

My clients, two businessmen facing a cashflow crisis in the small publc company they managed,  were surprised.  The position was very serious - the cash forecast revealed the need for more capital - the bank absolutely refused to lend any more; creditors were stretched to the limits.  They replied with a somewhat muted "Thank you".

However, within a couple of weeks the business had been approached by a new client who wanted a substantial job done in six months time.  Not only that,  they would pay NOW - £225,000 was received.  Another new client wanted a job done as well ad another £75,000 was received. The problem was solved.  That was four years ago, and the company is still trading - profitably.

Perhaps this little example answers the question set by the title,  for the title is deliberately double-edged.  It could be read as a question - Jesus at work?  Or of course it could be a statement regarding

Many businessmen seem to consider that working in business or indeed anything outside 'full time service' or  the caring professions is second rate and therefore Jesus couldn't possibly be interested,  let alone willing and able to intervene in work situations.  Many christians spend their working lives outside of  'full time service'  and outside of the caring professions.  This is the will and purpose of God -for he wants his children to be salt and light as we see that Jesus Himself is interested.

Indeed in as many ways the business scene is at the sharp end of christianity;  for it is in the market place that life is being worked out.  There are many opportunities for those of us  'out there' that never crop up for those in full time service,  like the one used above.  My two clients certainly would not claim to believe in God in the way they perceive I do,  nevertheless they acknowledge that God intervened on their behalf in response to prayer.

Not only is God interested in the business and working life of His children, but also He is leading more and more of us into business on our own account.   As larger organisations shed more staff - a process which is likely to continue for some time -   more and more christians find themselves led into business on their own or in small groups.

This movement brings with it the need to undetand God's principles as applied to the work place and the need for an active faith. There are many pitfalls ahead for those that strike out into business.  Not least of the pitfalls is the motive.  Because very often we have a 'religious' streak,  which needs to be able to do something for God.  Businesses are started with the motive of making money for the kingdom. Before the business starts,  its death warrant has already been signed.  God has no need of money to finance His kingdom. The wrong motive brings with it the wrong foundation.  This is not just me making a point.  As a Christian Accountant in practice I have seen the problem and have had to try to pick up the pieces of christian businesses founded on wrong foundations.  There is only one sound foundation for a christian in business.  That is to be engaged upon the works that the Father prepared beforehand for each of us to walk in.  The motive becomes obedience, and in two ways.

The first way of obedience is to be in God's stated truith.  God stated truth is found in the bible and particularly,  for members of the church,  is in the New Testament. Part of the application of stated truth means that each one should stay in the same calling he was when he was saved.  This deduction is based upon the principle laid down in 1 Corinthian 7.

The second way of obedience is to hear God's voice directing a new path.

Clearly one who is an infant at conversion cannot stay a child at school fo ever, and so God will want to move some people into new callings. The important thing is to seek and receive his guidence,  so that we move in obedience and not in our own thinking.  If we know we are in the place  God wants us to be in,  then we can be bold in asking Him to help in times of need;  to help in all sorts of ways.  We can ask for opportunities to witness to our contacts;  we can pray for difficult situations to be resolved,  for new customers,  in fact there are many opportunities to pray and see God influence the situation.

Where we have influence through seniority or through position,  we can seek to bring Godly  principles to bear in the workplace - to the benefit of all.  Sometimes we will have the opportunity to influence major decisions.  If we are decision takers,  we can pray for wisdom and insight - again for the benefit of all.  On speaking in these terms,  we describe a relationship with Jesus that is alive and vital. A relationship where we really do know Him,  and a relationship where we are able to receive His answer through the ministry of the Holy Spirit.

Businessmen tend to become rather hardened and there is a strong temptation to believe that Sunday and Monday bear no relation to each other so far as our spirituality is concerned.  However, as the times are more difficult and as things seem to move at ever increasing speeds,  the time is upon us to know His voice and to know His guidence.

In Mat 7 Jesus told of two builders, who both heard, built, and suffered tempests, but one heard the word and applied it, but the other did the opposite and ignored the word.  I don't need to explain which one survived and which one collapsed!

Are you building on rock or sand?  Do you hear the voice of God?   Do you know you are in the right place?   These are the sort of questions we should be asking ourselves to be sure we are on the right lines.

Whether the days ahead are easier or more difficult,  the only place of safety is on the rock.  We in the International Christian Chamber of Commerce believe we have heard God warn us that times will get harder as the shaking of all aspects of life continues.  We have also heard God encourage us to draw near to him, to count Him as faithful, to look to Him as leader and chairman and to expect him to build us up at work.

If you have appreciated this article we wonder if you might  consider the possibility of donating to the ministry of LIGHT INTERNATIONAL - The Global Review of Christianity,  as we do not charge to read editorial here.

We would be eternally grateful..

Praise the Lord,  more and more ministries now let the homeless sleep in their church halls over winter.

Depending on the venue the  'guests'  can be treated like royalty,  enjoying new clean designer clothes and bedwear provided daily, gormet food and heated floors to aid a decent nights sleep.

To celebrate,  LIGHT INTERNATIONAL looks back at her rather special visit to  Christian - run Rehabilitation Centre  Teen Challenge.

We are  delighted to present  LIGHT INTERNATIONAL - The Global Review of Christianity to the world once more in 2018 - an important time in our history...

A huge thanks for your patience while we upload more and more articles from the five sections of LIGHT INTERNATIONAL within the coming weeks.

Covers the day to day running of Churches in different parts of the world.

For business people... The I.C.C.C. International Christian Chamber of Commerce and others demonstrate  the miraculous new dimension of Jesus at work.

Deeply spiritual articles on gifts and fruits of the Holy Spirit.  Includes Spiritual and Praise Warfare, Intercession on a Global scale,  and  'forgotten' teachings like   'The Witness of the Spirit' by David Wilkerson.

Especially  gifted and often larger ministries sharing with us how our own faith and churches  can grow beyond belief...  Includes The Largest Sunday School in the World and The adoption of Third world orphans.

Billy Graham on how we should live our life,  lifestyle, including travel, and taking your church on a pilgrimage. World class sportsmen with faith and other celebrities etc sharing with us...